Officially recognised as a military order around 1190 AD ,during the siege of  Acre. The Teutonic Knights of the Hospital of the Blessed Virgin at Jerusalem as they were known became one of the greatest religious military orders in Europe. From their humble beginnings aiding sick pilgrims in the Holy land to controlling large amounts of territory in the Baltic.
﻿
Curteys Miniatures have been releasing a range of 28mm C13th  Teutonic knights over the last few months inc  command, Knights with lance, couched and in upright positions also with assorted hand weapons .

These 28mm C13th Teutonic knights have been done to represent knights as they may have appeared when facing the Mongols at Liegnitz in 1241 or the Saracens in the Holy Land during the final years of the Crusades. 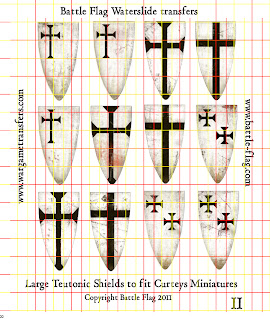