The Livonian Brothers of the sword

Bishop Albert of Riga founded the military order of the Livonian Brothers of the Sword (Latin: Fratres militiæ Christi Livoniae, German: Schwertbrüderorden) in 1202; Pope Innocent III sanctioned the establishment in 1204. The membership of the order comprised German "warrior monks".

Alternative names of the Order include the Christ Knights, Sword Brethren, and The Militia of Christ of Livonia. Following their defeat by the Samogitians and Semigalians in the Battle of Schaulen (Saule) in 1236, the surviving Brothers merged into the Teutonic Order as an autonomous branch and became known as the Livonian Order. 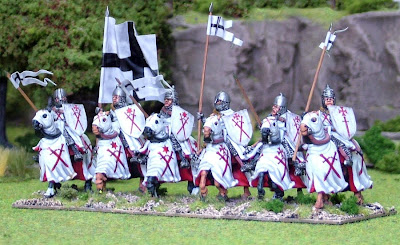 The Order was created by Christian of Oliva, the first Bishop of Prussia (1216-1228), to protect Masovia and Kuyavia against raids from the pagan Prussians who defied Duke Konrad I of Masovia's attempts to subjugate them. The creation of the Order was confirmed by Pope Gregory IX (1227-1241) in 1228. Duke Konrad granted the Knights the town of Dobrzyń (Dobrin) and the surrounding Dobrzyń Land (German: Dobriner Land), territory located south of and adjacent to Prussia. The Order of Dobrzyń was the only military order created in the territory of Poland.

In the face of the Order's lack of success in battle against the Prussians, as well as their small number (at its highest, 35 knights), in around 1235 the majority of the Knights joined the Teutonic Order, as allowed by a papal document, the Golden Bull of Rieti. In 1237 the rest of the Brothers were moved by Konrad to Drohiczyn to increase the military strength of that outpost. The Brothers of Dobrin were last mentioned when Drohiczyn was captured by Prince Daniel of Kiev in 1240.

All  shield, horse barding and penant tranfers are by Battle Flag available on the Curteys Miniatures website.
For more information on the Teutonic order follow this link,Teutonic home page.